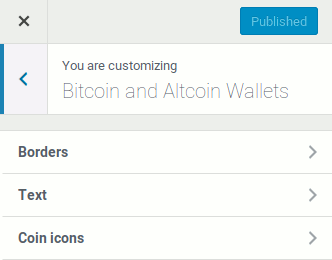 Good news for those who dislike meddling with CSS rules. Version 4.1.0 of Bitcoin and Altcoin Wallets includes Customizer integration. A big chunk of CSS styling for the front-end UIs that was previously static, is now dynamic.

The new Customizer settings only affect the parent plugin, not its extensions. There will be a subsequent release for integrating Customizer into the Exchange extension and to other extensions.

Currently you can affect three groups of UI styles: Borders, text, and icons.

Easily control the line style, line width, and color. Expand or reduce the padding inside the boxes. Add a box shadow behind the boxes to give a 3D appearance. For shadows, you can control the x and y offsets, shadow color and blur radius.

You can now choose easily the size of the coin icons displayed on the frontend. You may also add a drop shadow to the logos if you like. You can control the x and y offset, blur radius and shadow color.